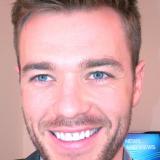 I am a television producer for a national broadcast show on CNN/HLN. My daily duties include a wide array of tasks including, but not limited to, booking guests, script writing, video editing, and preparing guests and the host for the nightly program.

I started college in the engineering department, toyed around with the idea of pre-medicine for a while, moved into journalism and then decided to pick up a theatre major as well.

After college I didn't want to get a "real job." I wanted to travel and do the things I heard everyone talking about, the things they wish they "could do" or the things they wish they "had done." So I picked up and moved from my family home in the suburbs of Chicago to New York City. I didn't have a job when I moved, but within a couple of weeks I found myself working as a happy hour bartender at a piano bar in the West Village of Manhattan. After about a year of working, I found I had made enough money to begin my dream of traveling. I quit my job and traveled solo with my backpack for a year. When the money ran out, I returned to New York. I bartended for a while, traveled for a while, and pretty much lived the dream in NYC. Eventually though, even this became tiring and I decided it was time to try that whole "career" thing. On my first interview, with some good advice from a friend and a sharp looking resume, I landed a job at CNN/HLN. What can I say? I've had a charmed life.

I always wanted to be involved in the media. My first love was talk radio and after working in it, I realized it wasn't for me. I actually fell into television largely by accident. I spent five years post-college bartending in Manhattan and traveling the world. When I got tired of these two pastimes, I decided to get a "real job" and use my journalism degree. I just happened to know someone who knew of a job opening with the Nancy Grace Show. I showed up to the interview, they were impressed with my story and my worldly experience, and the rest is history.

Mine is an incredibly fast paced work environment dealing with breaking news and news production. We cover a wide range of topics usually involving family crime. I've never once watched the clock on the job but the stress level and deadline requirements can be very intense. Then again, at the end of the day, no one's life is directly impacted by a poor decision on my part. The level of enjoyment is high, but the pay is lower than most people expect.

I wish I would have really known the value of hard work. It's the lifeblood of our American culture for a reason. People who work hard achieve more, plain and simple. But I'd also balance that with: do what you want when you're able to do what you want. Don't wait until you're too old to make your non-work dreams a reality. You might find you're behind your peers in your "career," but you will be far ahead in the game of life. Also, never underestimate the value of your social capital—build relationships wherever you go, talk to everyone and never burn your bridges in a fit of dramatics. Swallow your pride.