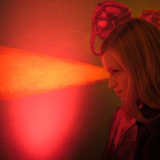 Although we didn't have majors, I came into school knowing beyond any shadow of a doubt that I was going to dedicate my life to theater, Shakespearean acting, to be precise. Well, that fell apart (though I am still passionate about the Bard), and the one thing that was a constant through all of my semesters was literature. I gobbled up as many classes as I could, and did what I needed to do to balance my degree requirements.

Seriously, the best thing I ever did was allow myself to break the promise of a lifetime of theater I made to my 17-year-old self. Forgive yourself your broken promises, and build your educational career with only your insatiable curiosity to feed.

After graduation, I was completely lost. I was going to move to Spain to become an au pair. I ended up going on a long cross-country road trip, ending up back in NYC and deciding, "Well, I guess I'll give this a try." I had a hard time getting a job at first, everyone does, but I got an editorial assistant job at Martha Stewart Living, and worked on film stuff for free outside of my 40 hour/week job.

Don't get me wrong, it's hard work to follow your passion, but it gets easier. As to how my undergraduate degree helped on this path, my major didn't determine my career in any way shape or form. The most important thing college does for people is to help them become critical thinkers who can write well. If that's all you do here at UT, consider yourself having already won half the battle.

The biggest influence on my career has been my group of friends. I graduated from a college that didn't have grades, majors, or tests (no, it wasn't as easy as you think unless you can crank out a 30 page essay in a few days). I had NO IDEA what I wanted to do with my life. I had a vague notion to work for a publishing house, but in New York City, those jobs went to those who knew for certain that's what they wanted to do. So, while I worked at Martha Stewart Living Magazine, my college pals and I started a non-hierarchical media collaborative called Meerkat Media. I went in only knowing how to write and how to act, and when I left New York I could produce, direct, shoot, edit, and promote a film.

One thing led to another, the only constant being my continual passion of making films. Once you get your first job (mine wasn't even in my current field), no one asks about your major, certainly not your GPA (I don't even know what mine is because my college didn't publish our grades). In the end it's your passion and not what's on a piece of paper that will get you where you want to go.

I know that parents are a huge influence on what path you choose, and they may have the financial backing to make your education possible. Don't let that determine what you major in. Your parents first and foremost want you to be happy! At the end of the day, they don't care how many zeroes are at the end of your paycheck as long as you bring it home with a smile.