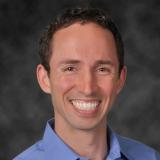 I conduct my own research into scientific visualization algorithms and applications (like the weather report, but with different data) and I consult with researchers who use our advanced computing systems to help them gain better insight from their visualizations.

Show
Undergraduate Degree(s): Computer Science
Graduate degree(s): I have a masters and a doctorate both in computer science. My dissertation evolved out of a class project and ultimately was put to use in part of my career at TACC.
Favorite class(es): Neural Networks and Cognitive Science
Changing majors:

I started out pre-med / pre-law in college, but neither really took. I had played with computers in elementary and middle school, and I thought that no matter what, a degree in computer science would be useful. A friend in the dorms was CompSci, and I started taking classes with him.

My undergraduate degree gave me the initial training and inspiration to pursue a graduate degree and my eventual career. After undergraduate, I spent two years with a dot-com startup, which gave me crucial insight into the business world and "real life". I then returned for graduate school and eventually took up a student job that turned into a full-time job at TACC.

I had a student job with TACC, and through my exposure there, I discovered that I could do the work I wanted to do in a positive, supportive environment with cutting-edge people and technology.

I have great flexibility in conducting research I find interesting and fulfilling, and I get to work with talented people who are leaders in many different fields across science. Working at a university gives me day-to-day freedom and flexibility that might not be found in a corporate environment. While a public university cannot match salaries and perks in industry, the health care and quality of life significantly balance this.