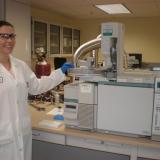 I analyze blood and other biological specimens for the presence of drugs and alcohol in drug driving cases and post mortem individuals. I also go to court to testify about my analysis.

I had originally declared a Spanish major only, but then added on Chemistry as a second major during my Junior year.

I had always had an interest in forensics since high school, and through my graduate toxicology coursework I became very interested in forensic toxicology.

Career benefits would be most forensic jobs are with a state or federal agency, which provides good hours, great benefits and decent wages. Also, forensics is a very interesting field of study with the opportunity to learn new things every day. One possible negative (depending on the type of agency your work for) could be the amount of time spent traveling for court and large caseloads that can create a stressful work environment.

I wish I had taken more classes outside of Spanish and Chemistry to broaden my knowledge of different disciplines. College is a great opportunity to learn about so many different subjects.